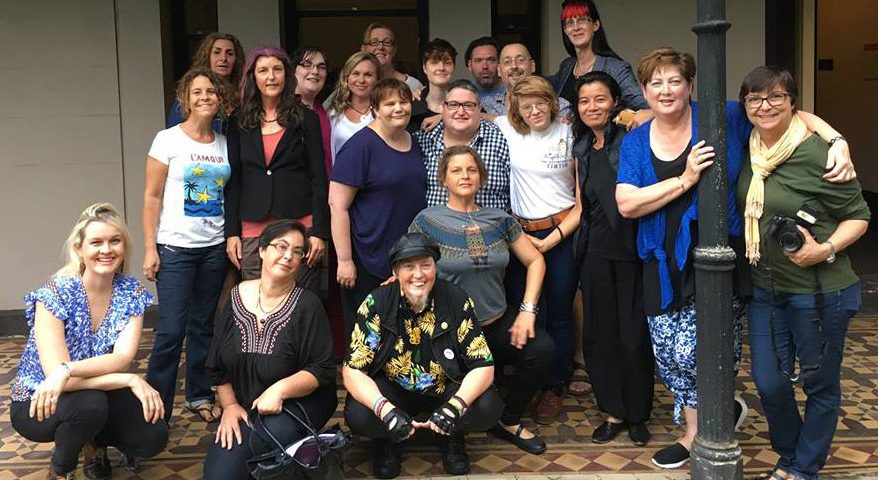 More than 20 intersex advocates from Australian and Aotearoa/New Zealand intersex organisations, along with other independent activists came together at a two-day retreat in Darlington, Sydney, on 2-3 March. A year in the making, the collaborative event also led to the issuing of the “Darlington Statement”, outlining key priorities including legal reform to recognise our bodily autonomy, effective rights-based oversight of clinical decisions, alongside access to affirmative health care and the importance of peer support.

The Statement reads: “Current forms of oversight of medical interventions affecting people born with variations of sex characteristics have proven to be inadequate.”

As well as a call for effective oversight and standards of care that respect our human rights and bodily autonomy, we call for greater respect for our diversity: heterosexual or not, identifying with legal sex assignment at birth or not, whatever our legal sex and our gender, we need respect, and effective protection from discrimination on grounds of sex characteristics.

The Statement contains calls to actions for our governments, clinical institutions, LGBTI and other allies.

Morgan Carpenter, co-executive director of Organisation Intersex International Australia (OII Australia) states: “Amongst those priorities, we seek a prohibition of unnecessary so-called “normalising” surgeries, like that in the 2016 Family Court cases of Re Carla. We need to make sure that such cases don’t happen again, and provide lifetime support for people dealing with the lifelong effects of what the UN Committee on the Rights of the Child recognises to be harmful practices.”

In Re Carla (Medical procedure) [2016] FamCA 7, the Family Court of Australia stated that parents could authorise the sterilisation of a 5-year old child, despite medical evidence that does not support that decision. The judgement was grounded in gender stereotyping, and took place two years after the child was subjected to clitorectomy and labiaplasty surgeries without independent oversight; those surgeries were described by the judge as having “enhanced” her female genitalia.

Tony Briffa, co-executive director of OII Australia states: ”I am incredibly proud of the strength of our diverse intersex community coming together and developing a unified statement that addresses intersex issues so comprehensively and clearly. This statement will be the basis of much of our work over the coming years, and we hope it is disseminated, read, quoted and even implemented by governments and organisations everywhere. The intersex movement in Australia and Aotearoa/New Zealand has come of age and will no longer tolerate being silenced.”

Bonnie Hart, president of AIS Support Group Australia (AISSGA) states, “The coming together of so many different intersex people from around Australia and Aotearoa/New Zealand is cause for celebration in and of itself. However the penning of the Darlington Statement has made this intersex community retreat absolutely historic. This statement is a powerful and directive message addressing the key issues, currently affecting intersex people in our countries. By transparently outlining our common direction, the Darlington Statement has galvanised our community and the intersex movement generally. I feel so honoured to have been exposed to such insight and resilience and urge governments, health and social services to hear our voice and implement our demands.”

“The lifelong impacts of non-consensual sex reassignment surgeries and hormone treatments imposed on infants and children cause trauma and injury that last a lifetime.” says Imogen Yang from Bladder Exstrophy, Epispadias, Cloacal Exstrophy, Hypospadias, Australian Community (BEECHAC), who is active in peer support of adults affected by these practices. “Noone has the right to make such decisions when these surgeries are medically unnecessary and deferrable to a time when the individual can decide for themselves. The longterm effects on physical, mental, sexual and reproductive health are devastating and avoidable. We recognise that parents continue to be placed in incredibly difficult situations where they are not fully informed by doctors about these impacts, and we believe they and their children deserve better so that family relationships can also be protected.”

Mani Mitchell, executive director of Intersex Trust Aotearoa New Zealand (ITANZ) said: “I had the privilege to be at the world’s first retreat in California 21 years ago. Being in Australia for this retreat was utterly wonderful. This movement has come so far. Proud to be part of this ‘red hair’ mob.”

Morgan Carpenter added: “We would like to thank the organisations that made the event possible, including the National LGBTI Health Alliance, Twenty10 and the Astraea Lesbian Foundation for Justice.”

Some words from the Darlington Statement:

“We recognise the diversity of our sex characteristics and bodies, our identities, sexes, genders, and lived experiences. We also acknowledge intersectionalities with other populations, including same-sex attracted people, trans and gender diverse people, people with disabilities”.

“We call for the immediate prohibition as a criminal act of deferrable medical interventions, including surgical and hormonal interventions, that alter the sex characteristics of infants and children without personal consent. We call for freely-given and fully informed consent by individuals, with individuals and families having mandatory independent access to funded counselling and peer support.”

“Our peer support organisations and other peer communities need resourcing and support to build communities and networks inclusive of all intersex people. No intersex person or parent of an intersex child should feel they are alone, irrespective of their bodily variation or the language they use.”